My day started with me sleeping in and just stretching at the gym and taking a shower at 7:30. Then I went to Safeway and got my breakfast burrito, coffee, and a chicken parmesan for lunch.

On my way to work I got a text from our secretary Dianna to see if I wanted to sub Ms. Ko's 7th grade class. I gladly accepted. I printed out 4 copies of a number talk I saw on twitter. It was my first dot talk and definitely the students first. I had 3 different students participate. One of the students was the first and last to participate. I was happy with the results, especially, because one student saw 3 squares of 4, and subtracted 2 because two were double counted: 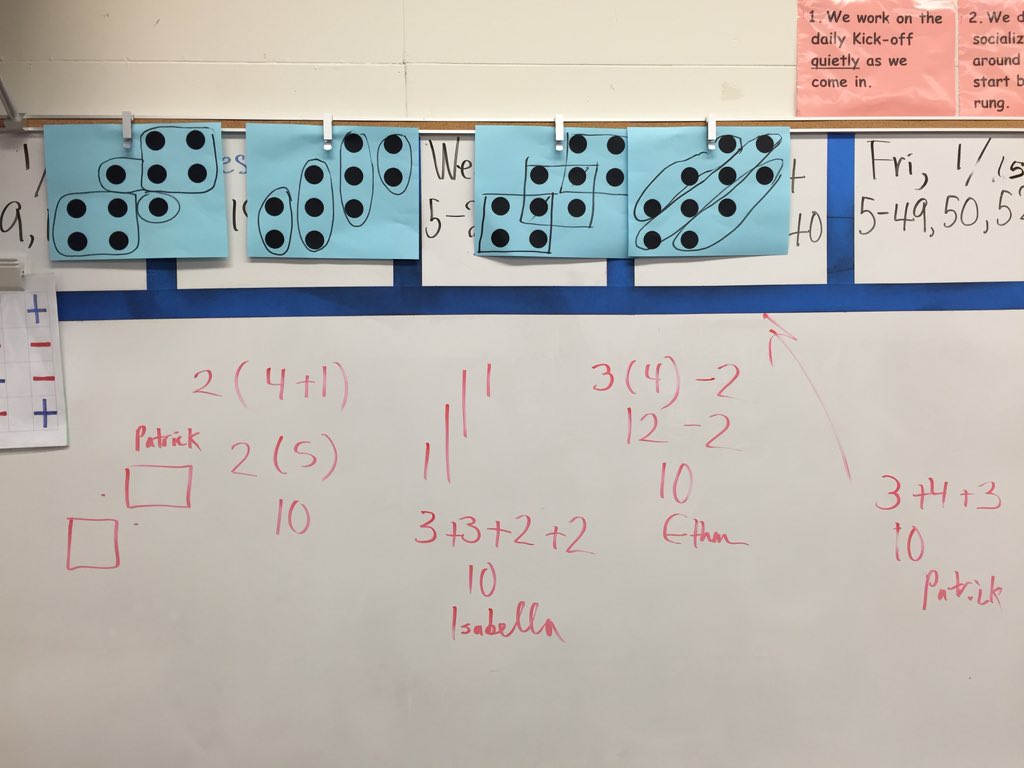 Today was a special estimation. It was me standing in front of the MLK Jr statue on the Sojourn trip this past year. Students estimate the height. A lot of students thought it was 3 1/2 to 7 times the height of me. Some converted to inches first, and some students rounded my height up.

I posted the photo on twitter and I think a lot of teachers may have used it:


In first period students did Becoming an Artist. They translated, rotated, and reflected figures to form a rocket ship. I demonstrated with patty paper how to rotate 180 degrees clockwise about a point.

Then students took an assessment on 3 skills: solving for y and fraction busters, system of equations w/ equal values, and transforming a triangle.


In accelerated students worked on Dan Meyer's Desmos activity Penny Circle. A lot of students tried a linear model and realized it was wrong. A lot of students underestimated. They saw that the exponential model predicted an answer that was way too big. They agreed it was a quadratic model.

I asked students what were the actually finding out and why was it a quadratic? Eventually students suggested it with the area of a circle. I asked for that formula. They said area equals pi times radius squared. Then I asked what is a quadratic and what is the basic equation of it? Eventually they said x squared or y equals x squared. I asked them what they noticed about the two equations. They realized  both were raised to the 2nd power.


Some students finished early and got to do the Desmos Regressions tour.

Then students took an assessment. Unfortunately, I wrote nickels instead of times in a coin word problem, so their system of equations did not solve correctly. I will have them retake that portion in the last section of class on Tuesday.
After work I setup my board for Tuesday, saw some old students, made copies in the office, and then decided to go to American Bull and invited our dean of students. I randomly bumped into my old coworkers from the previous school I worked at and had some great conversations.

When I got home, I put away clothes, ironed, and did some chores, then relaxed and watched TV.

Mr. Joyce
I currently teach Common Core Math 8 and 8 Accelerated (Algebra I). I have taught Math 6, 7, 8, 7 Accelerated, and 8 Accelerated. I am always searching for ways to improve my practice. Contact me on Twitter using @martinsean.